Including Past Events and Links to SignUps/Photos/Videos 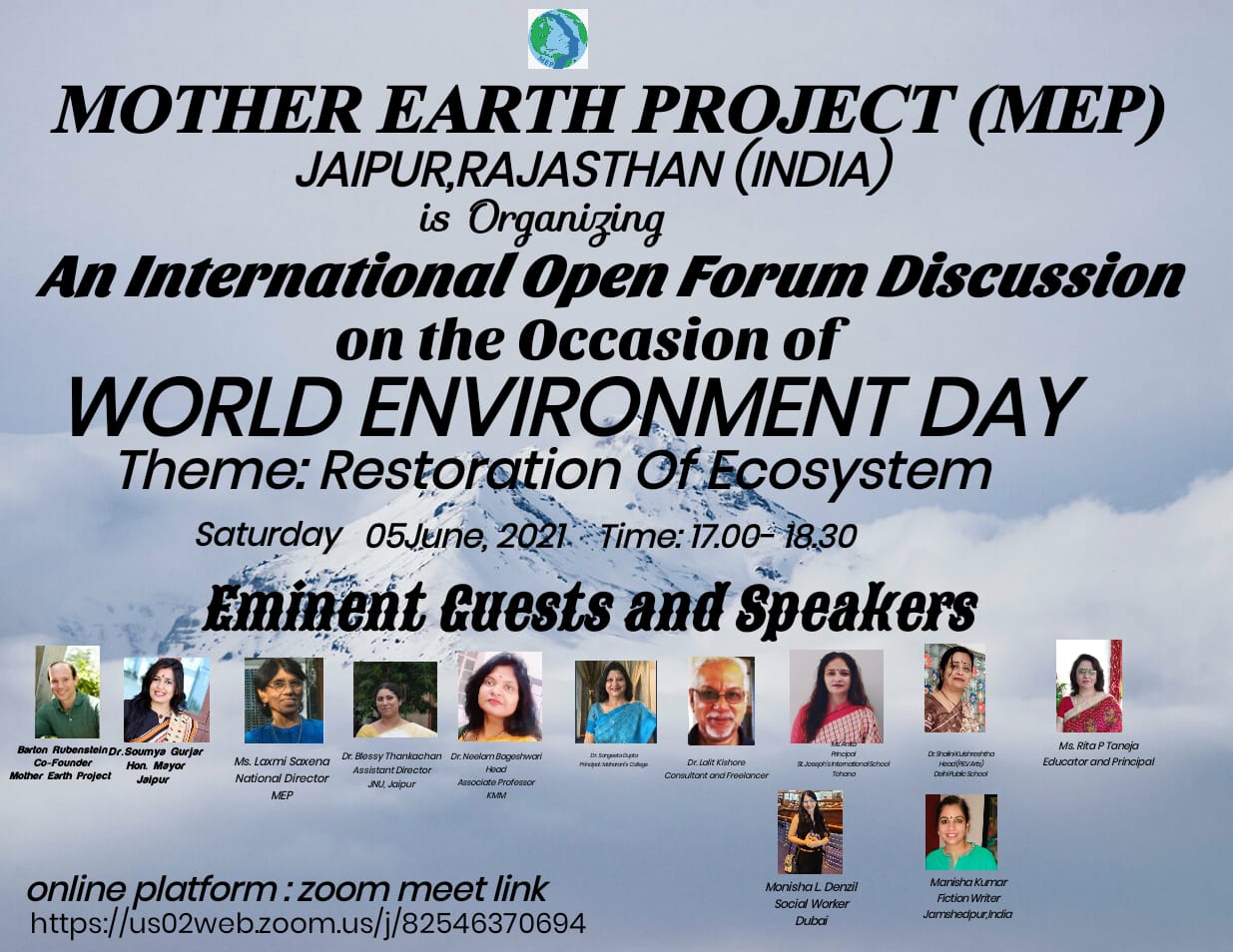 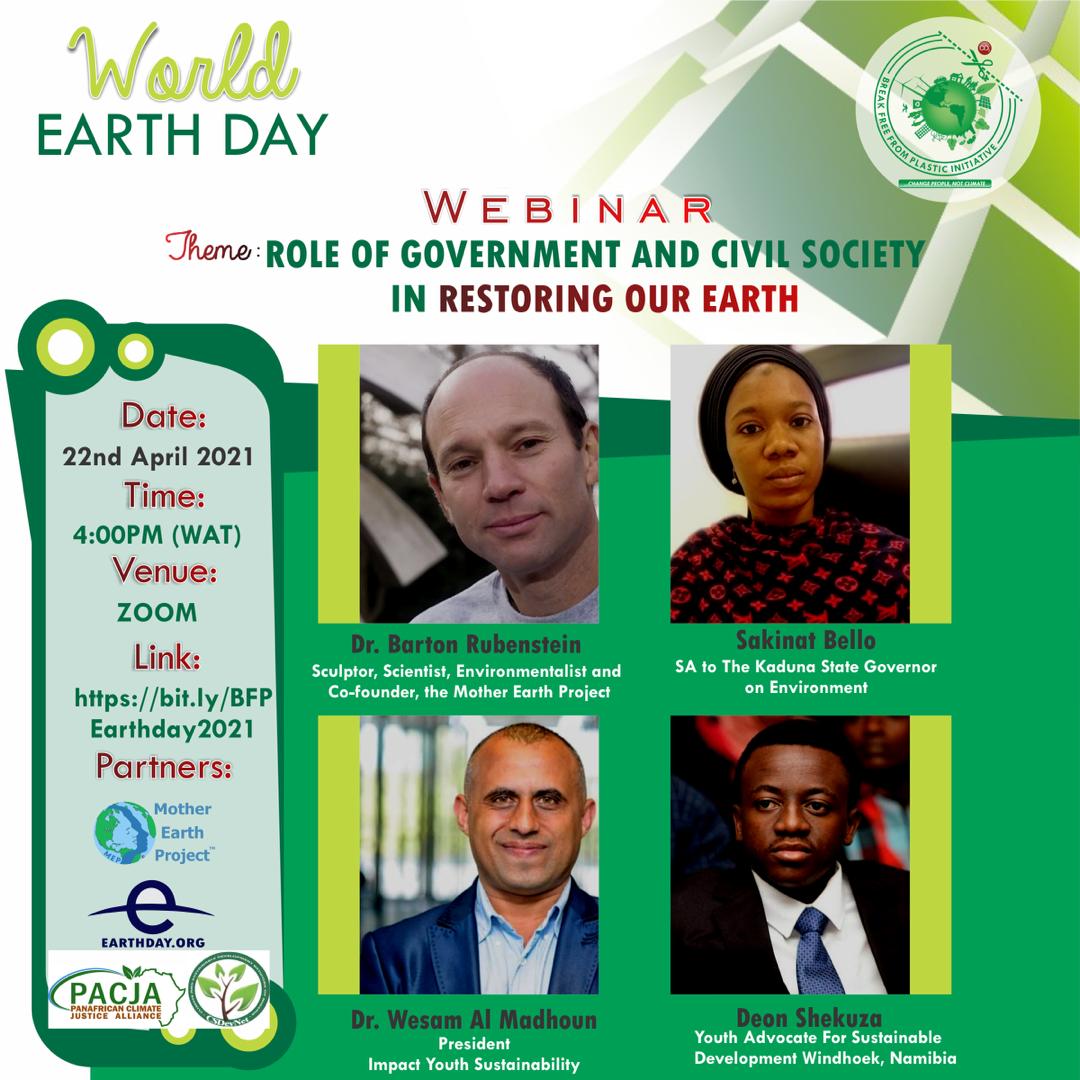 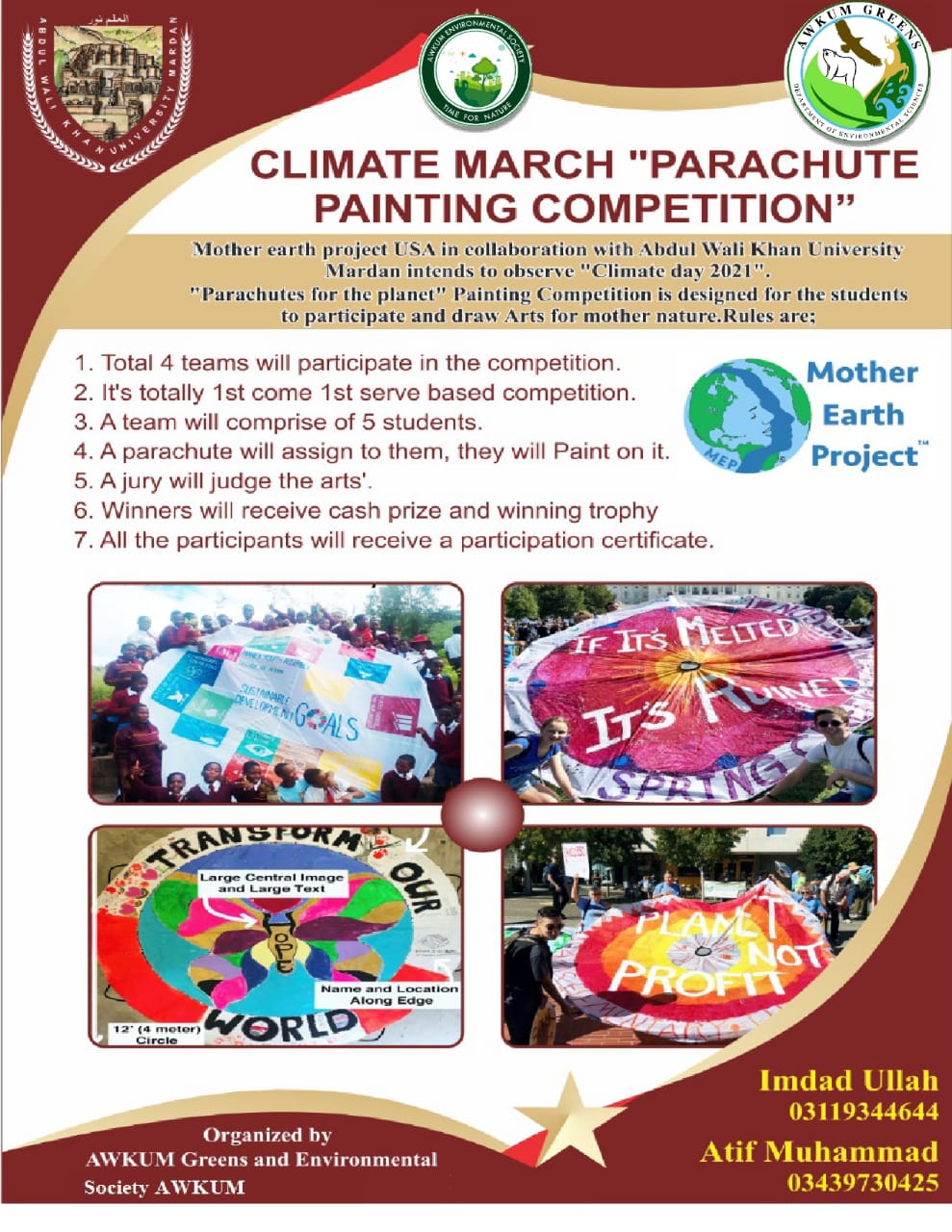 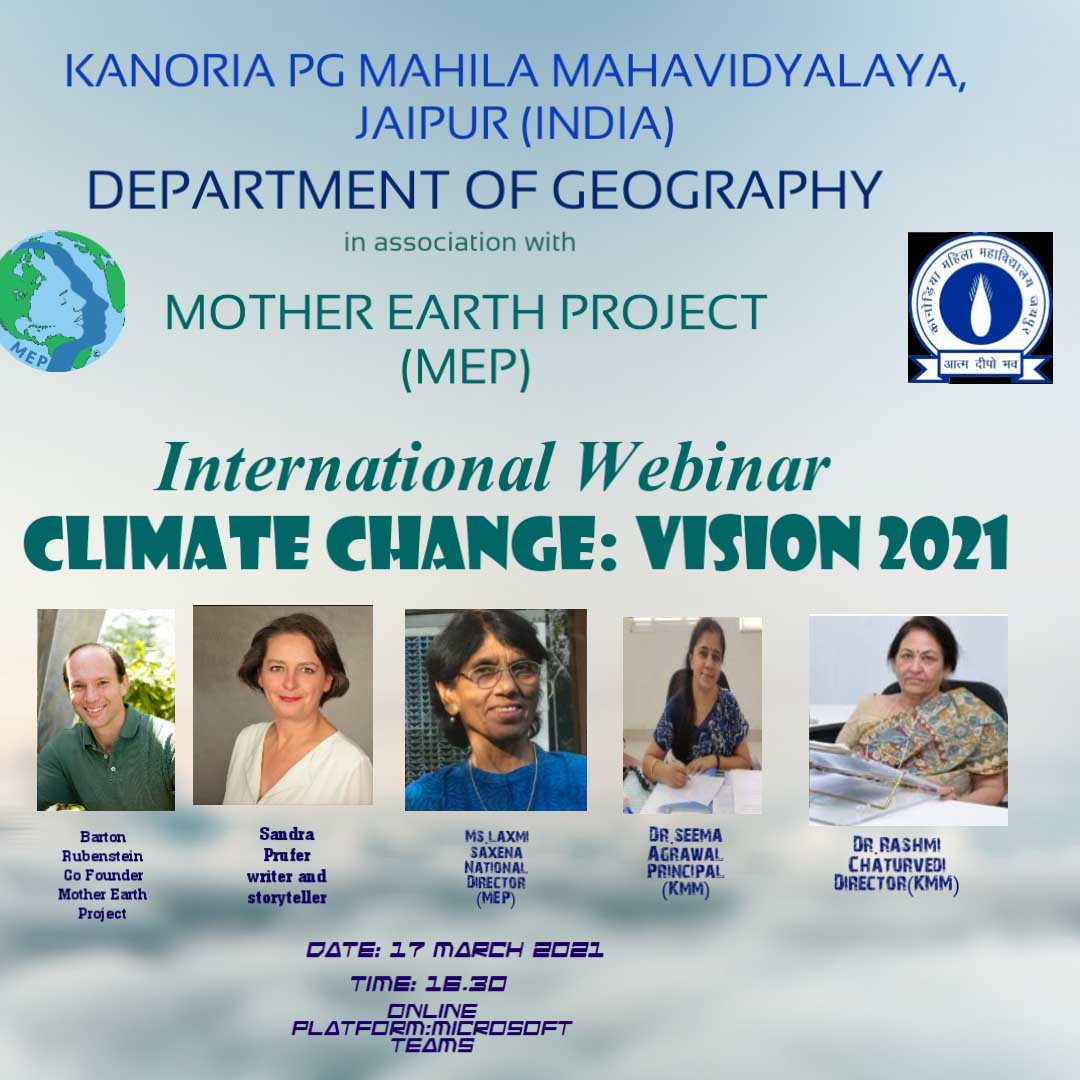 • Kenya, Nairobi – Caroline Wambui is a journalist and has also worked in Parliament in Nairobi. She will be organizing a Parachute event with 30 young people to raise awareness about the climate emergency and also take their parachutes to the environment minister to discuss climate legislation.

Meeting begins at 17:55 after initial meet and greet.

Over a dozen speakers from around the world spoke about environmental concerns in their respective communities as well as sustainable actions that they are taking. It was a great way to share info and feel a part of the global impact of the Mother Earth Project and its Parachutes For The Planet project.

• World Day of Climate Action – Millions of Climate Activists and Environmentalists will join Greta to raise awareness of the ever worsening climate emergency on our planet.

• Bonn, Germany – Dedication Ceremony of Mother Earth sculpture with parachutes, music and speakers, including Dr. Martin Frick, Director of the Climate and Environment Division at the United Nations Food and Agriculture Organization and Sandra Prüfer, MEP Director for Germany 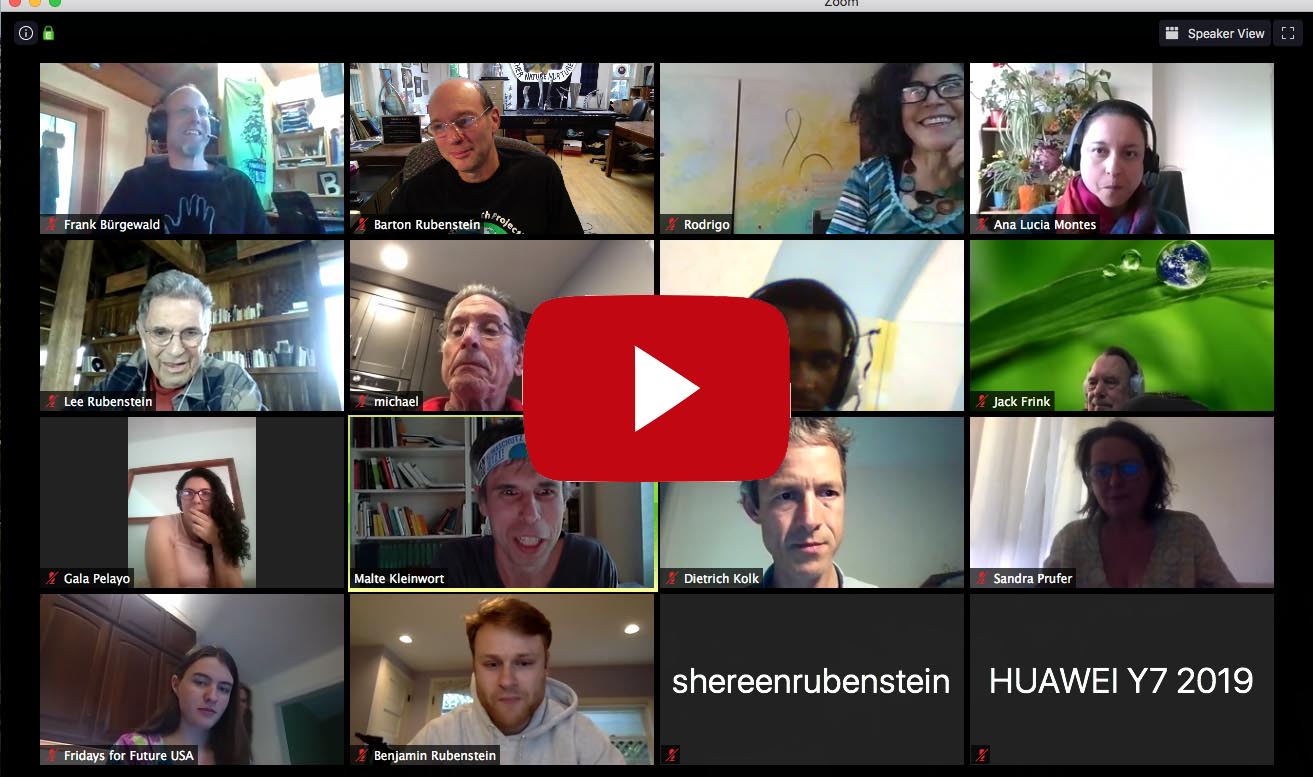 • Chevy Chase, Maryland – MEP cofounders created a Bat Parachute, inspired by a Washington Post article that connects COVID-19 to the Climate Emergency. MEP also placed a box of free parachutes for neighbors to take, decorate with art, their environmental concerns, and next sustainable actions, this all during the COVID-19 stay at home lock-down. 100 Parachutes were distributed and displayed in the extended neighborhoods. More info here. 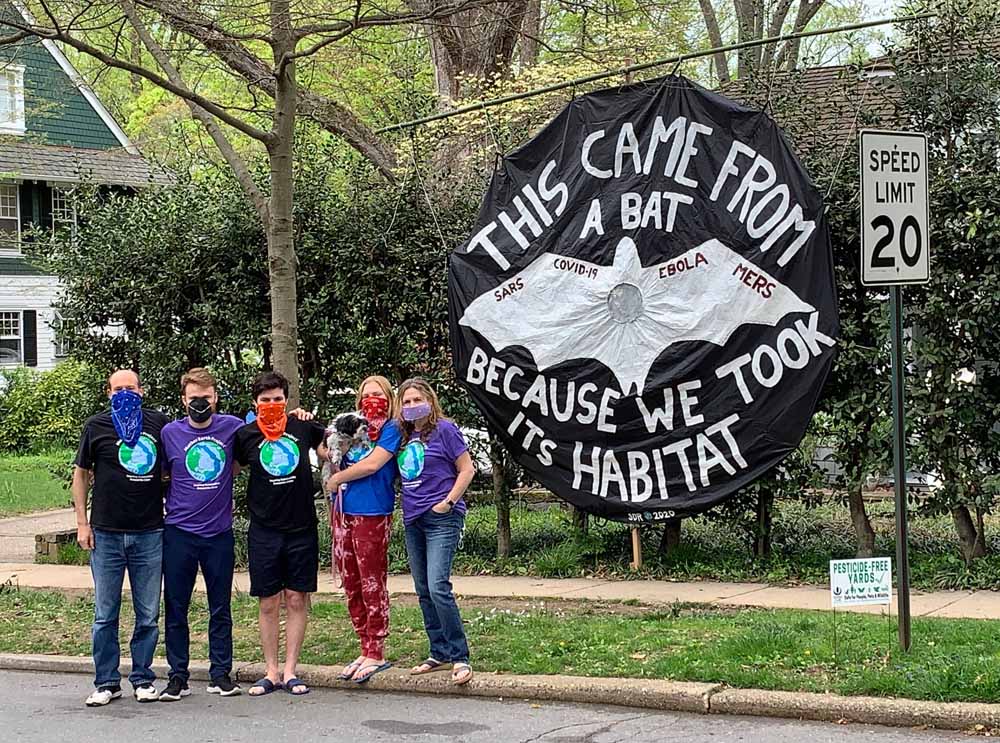 September 20
• Washington, DC – John Marshall Park (4th and C Streets NW) at 11am, marching to US Capitol (west side) 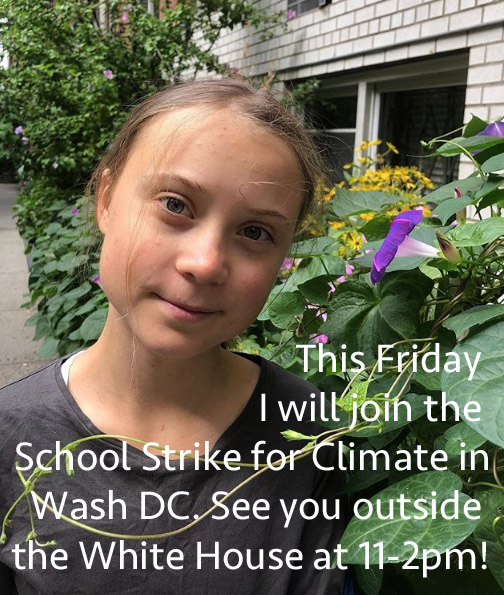 July 11
• Washington, DC – Play-In For Climate Action, Join Moms from across the country at our sixth annual event with Parachutes, National Mall at 3rd St 9-11am. Register Here. 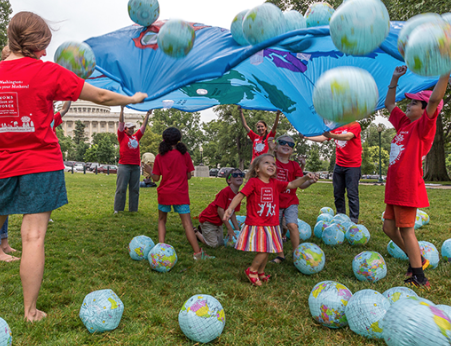 May 24-30 and June 29
• Mali, Batako – Parachute Action (15) in the INNOV VILLAGE component of the upcoming Africa parade of Innovators Hii-FESTIVAL. Parliament Members, US Embassy and other Officials to be present. 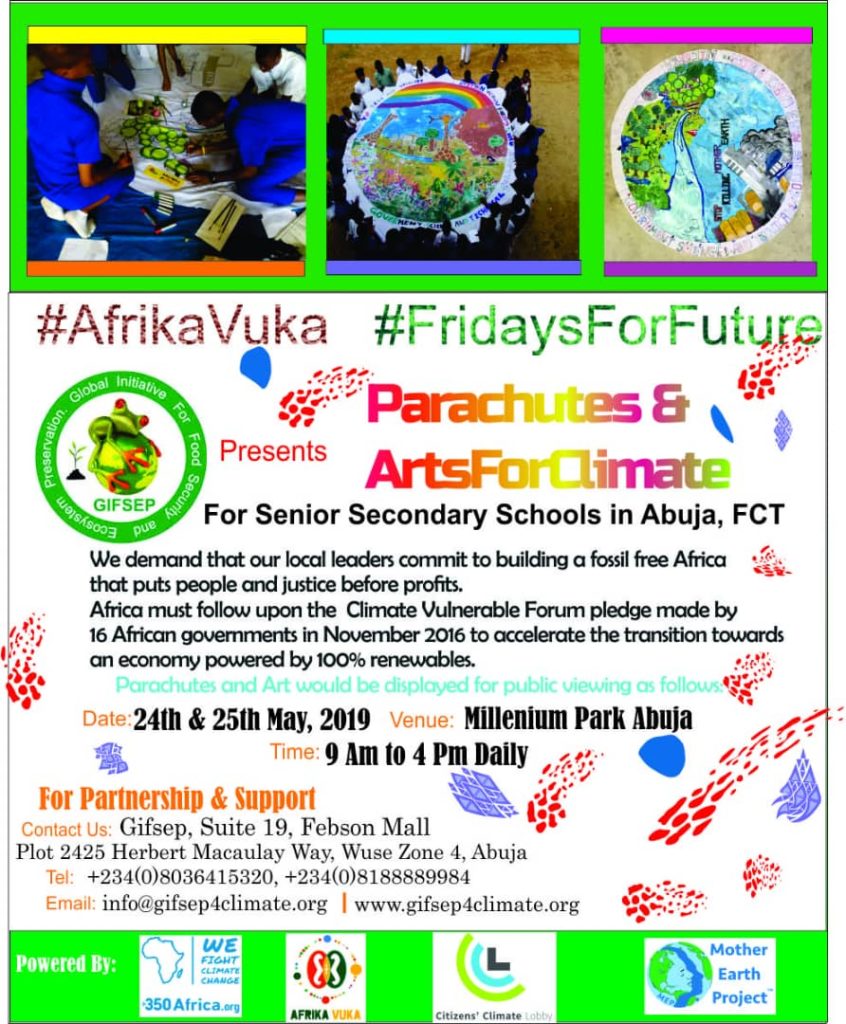 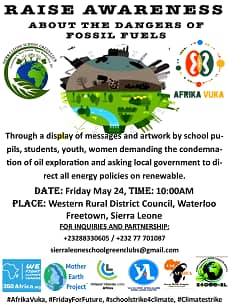 Climate Strike with Fridays For Future and Parents4Future groups and parachutes in Bonn, Germany

May 19
• Bonn, Germany – Paint a Parachute together 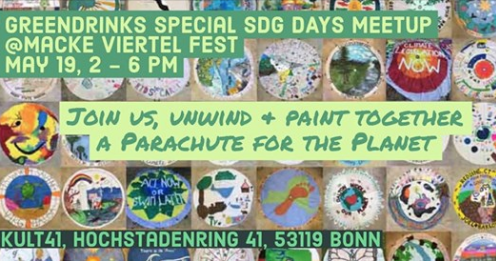 May 3
• Canada and WORLD – Fridays for Future Climate Strike with Parachutes with dozens of schools across Canada striking for better climate laws.

May 2-4
• Germany, Bonn – United Nations Sustainable Development Goals (SDG) Festival of Action, World Conference Center. 17 Parachutes on display, one for each of the 17 SDGs.

March 26
• Canada, Ontario – Breakfast with Members of Provincial Parliament at Queen’s Park,
Parachutes across Ontario will be on display 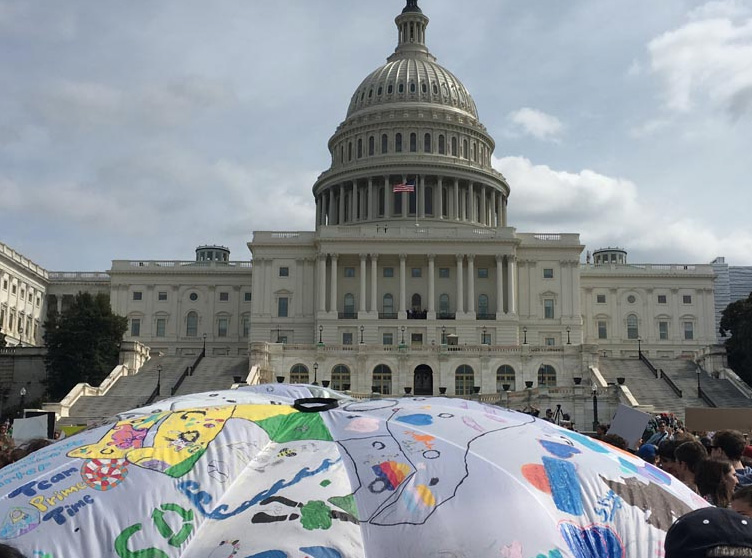 January 22-27
• Panama, Panama City – World Youth Day: The  Pope comes to Central America and will be surrounded by 41 Parachutes, created by local religious and school groups. 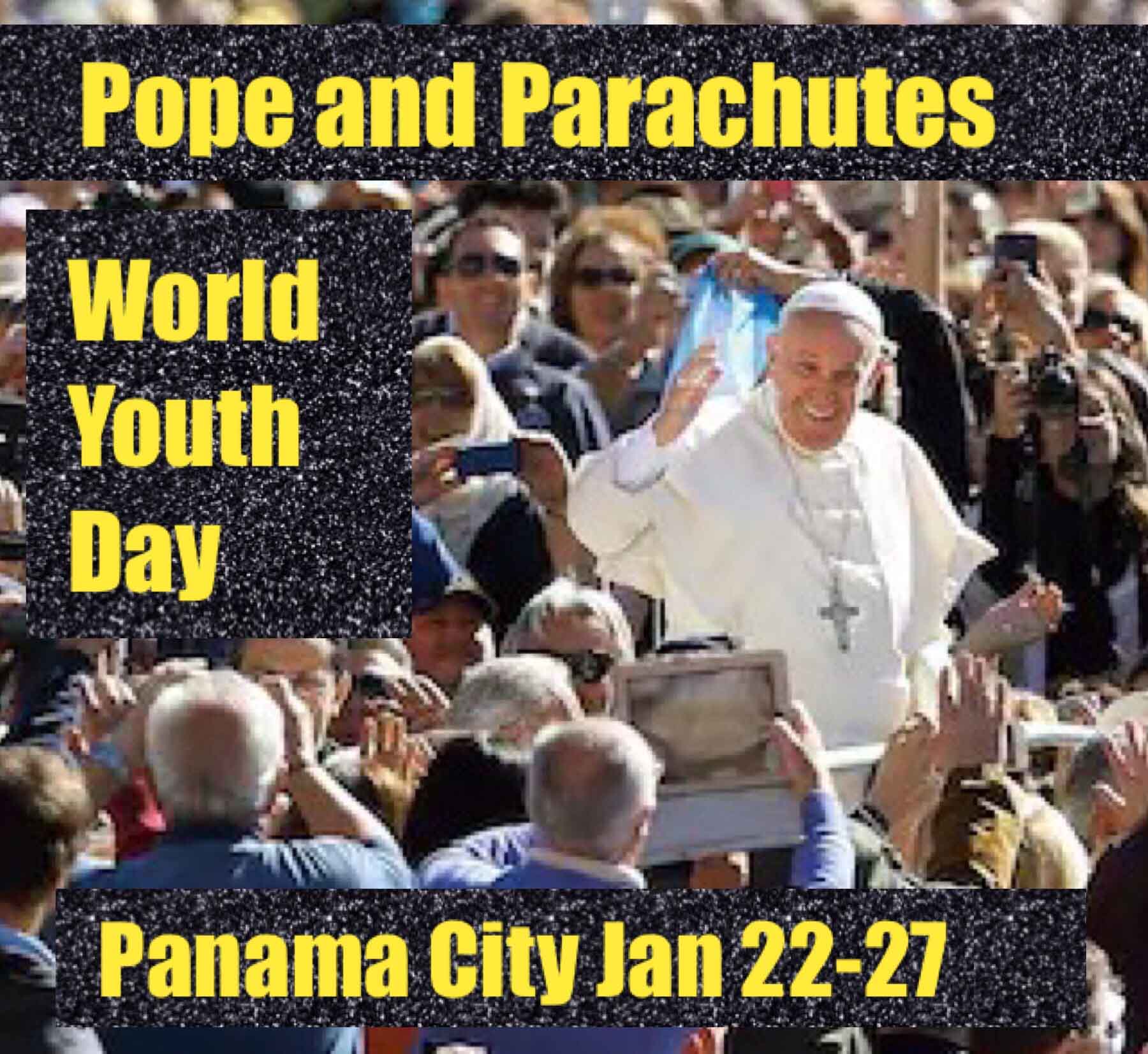 December 28-29
• Zimbabwe – Seminar and Safe Cities Summit in the City of Mutare, attended by mining companies, extractive companies and industry. Many parachutes will be at this event. 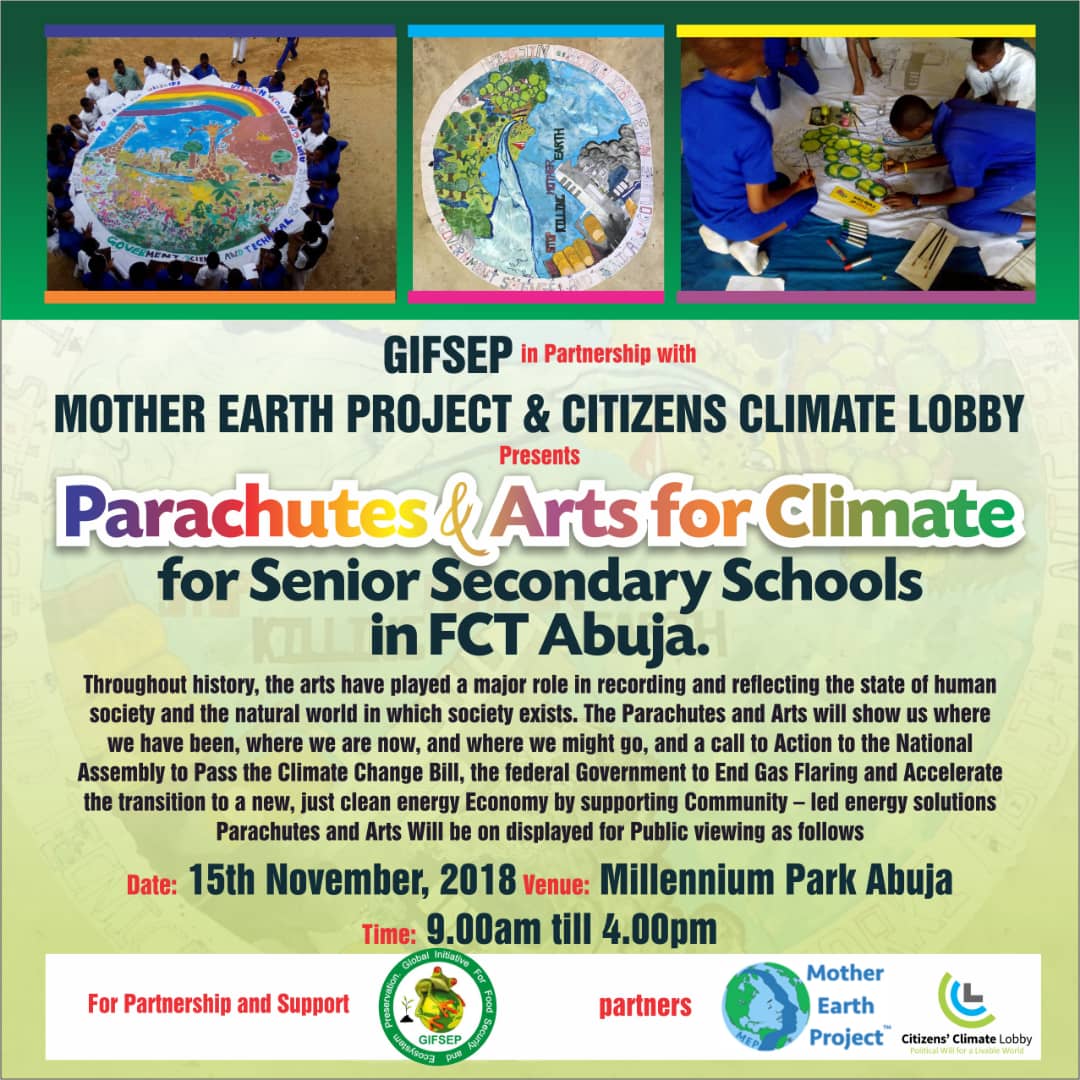 October 29, 12-2pm
• Washington, DC – US Supreme Court, Parachutes in front of Supreme Court. This court is discussing the Juliana vs USA case (21 kids suing the US government about climate change).

October 29, 9-11am
• Washington, DC – Freedom Plaza, Parachutes across the street from DC Council Building. This council is voting on most ambitious climate bill in US, 100% carbon-neutral by 2032. Coordinated with CCL. 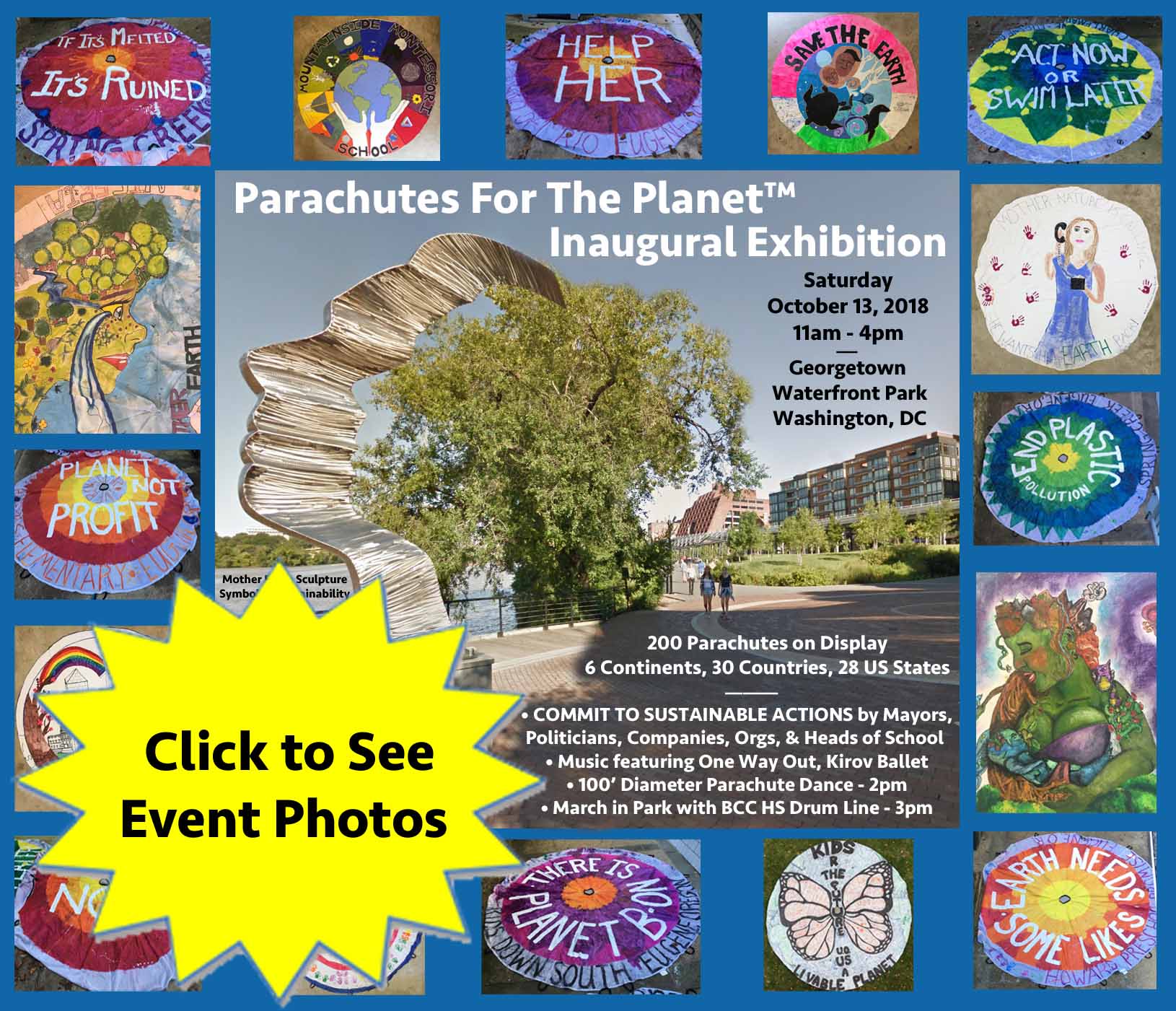 The MEP’s Inaugural Dedication took place on Climate March Day next to the Mother Earth sculpture in Washington, DC, along the Potomac River.