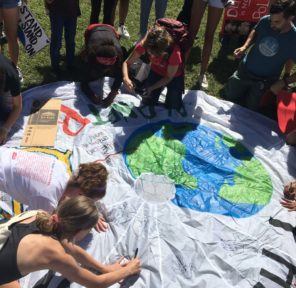 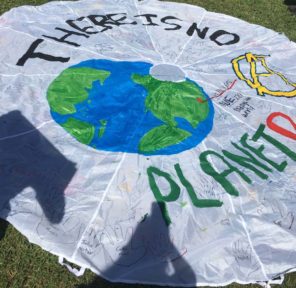 Hi Mother Earth Project, At Cary Academy, we are creating our own ‘mini strike’ in school during lunch to show our support for the climate movement because most people cannot get excused absences for the September 20th strike. We are hoping one activity we can do is to create a climate activism parachute from our school for the representatives from the NC climate strike to bring to the strike in Raleigh that Friday. Thanks so much! Allie Chandler NC Social Media Director and CA Ambassador for the US Youth Climate Strike

Thanks so much for the parachute! It was a huge success at the strike on Friday. We decorated it at school during our climate pre-party, then brought it to the strike. We had everyone that wanted to trace their hands in sharpie and then write their names in the middle if they were standing with us against climate change. It was super powerful and encouraging- thanks for giving us this experience.