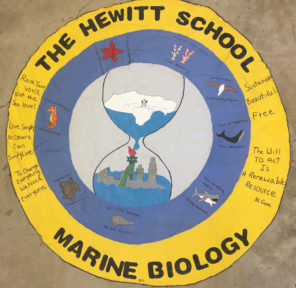 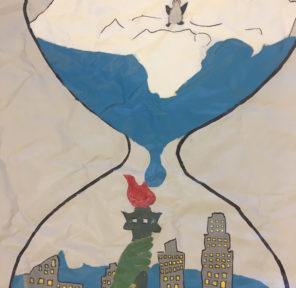 Our school is very much involved with sustainability. This parachute was designed and made by 3 eleventh grade students in my marine biology class after the seniors were done with classes. Unfortunately I don't have any "in progress" photos- just the final product and the 3 juniors presenting it to our upper school in an assembly. The inner ring of the parachute represents the polar ice melting causing sea level rise in NYC affecting buildings and the Statue of Liberty. The students decided to focus on marine life that were not the usual poster animals for climate change in order to raise awareness of their plight. Hewitt is a small all girls independent school in Manhattan, and sustainability is a major focus in grades K-12. We define sustainability as "meeting the environmental, economic, and social needs of the present without compromising the needs of future generations." We also have a full day devoted to sustainability speakers from various industries, workshops, activities, and community involvement at all grade levels. I am the Co-ordinator for upper school sustainability at Hewitt. We have been very active over the years. Hewitt hosted 2 conferences for 250 NYC students to educate them about plastic bags and prepare them to address City Council when the bill was introduced. Two Hewitt students were chosen to address Mayor de Blasio after the bill was passed, although the state legislature later overturned the passage of the bill. We are now involved with the new bill proposed in NYC on styrofoam, and I have included the photo of 2 Hewitt juniors addressing the group at the Youth Rally at City Hall in May. We are also a part of an inter-school green team that discusses sustainability actions at each school, and we also work together on various projects. For example, several schools joined together for a rally on Earth Day, and although Hewitt has been involved in the One Last Straw Campaign for two years, next year many other city schools will also be involved in this campaign. Hewitt students collect recyclables daily and also collect compost in our cafeteria, which is also picked up daily. We are part of the Green Market Collection that collects clothing for Grow NYC and have a bin in the lobby at all times.