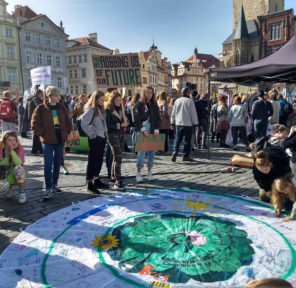 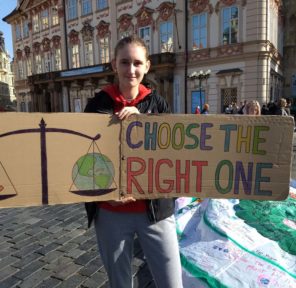 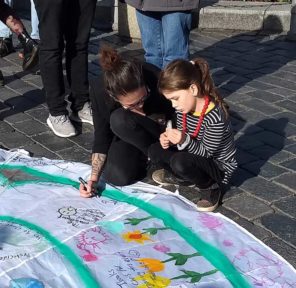 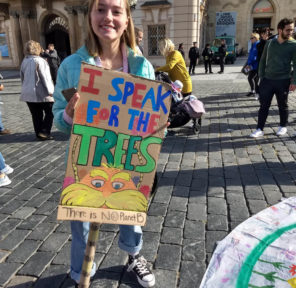 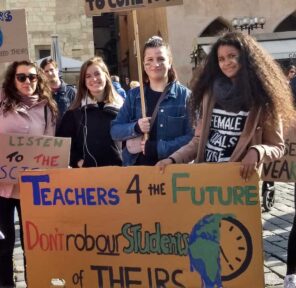 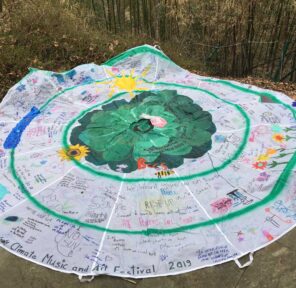 We started this parachute at the First Montgomery County Climate Music and Art Festival in June 2019. I traveled with the parachute to Prague, Czech Republic in September 2019 and connected with high school students who had organized their first Climate Demonstration during the week of 9/22/19 as part of the worldwide Climate Protests. They shared that their right wing government had not passed any meaningful climate laws. There were many educational conversations with students, tourists and locals about advocacy and inspiration to fight for change in their own communities.

Advocacy and education in Montgomery County. In Prague the Climate Protest was the first of its kind. The parachute was laid down in the Old Town square for tourists, local people and students to see. Some plans I heard: create small groups in other towns, educate more people in their communities, create a larger movement that would then be able to advocate for better laws.

By sheer luck I found the young activists organizing the FFF March in Prague before 9/20. We marched with them. I had the painted parachute from the Montgomery County, Maryland Climate and Music Festival with me and one blank one. I had even bought the paint to create a new one with them. The latter didn't happen since they dispersed very quickly after the March and beforehand there was no time. I left the parachute and paints there for them to complete the project. Still I spread out the painted parachute on the beautiful main square and had great conversations with lots of people about climate. I also decided to have people sign messages on our painted parachute, mostly in Czech. - Chris