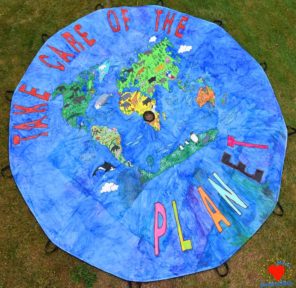 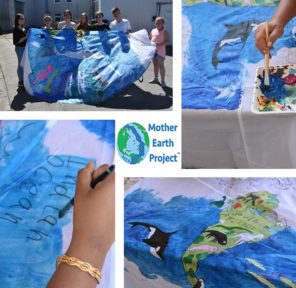 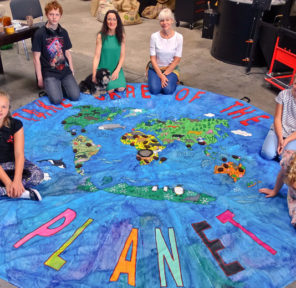 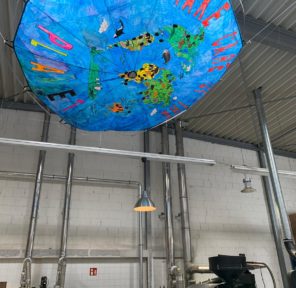 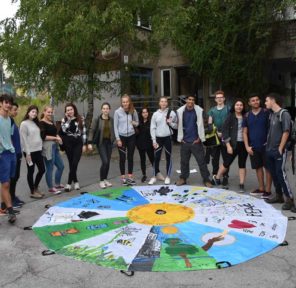 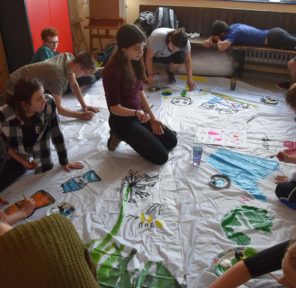 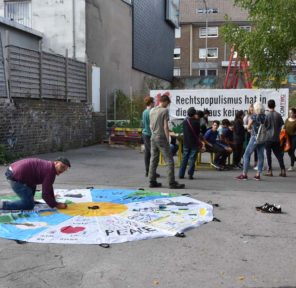 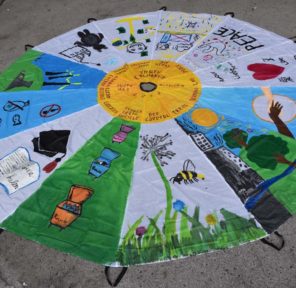 Joint commitment to sustainability: Kunstschule Heimat and Aktion Kinderpläne e.V. are creating a parachute with children as part of a worldwide project. The parachute is a metaphor with the desire to bring the world to a safe place to build a safety net takes shape. The Remscheid-based art teacher Ute Lennartz-Lembeck (Kunstschule Heimat) has been involved for many years and is already working with the youngest people in developing an awareness of sustainability. Stephanie Rigano, coffee roaster, founded the non-profit association Aktion Kinderpläne to enable education for children, especially in developing and emerging countries. Commitment to the younger generation and a conscious use of the resources of our planet connects the two women. On the occasion of the 20th anniversary of the Rigano coffee roasting plant, the parachute was painted in June. A total of 20 children from Remscheid and many adults have helped painting the parachute, which honors the appeal "Take care of the planet" in a colorful globe. The parachute will be exhibited at the Rigano coffee roaster starting on 2 August, including hand-crafted coffee beans made of felt, which adorn the respective growing countries. At this point, too, a bridge is being created from the art school Heimat in Bergisches Land to the coffee-growing countries in which Aktion Kinderpläne e.V. is involved. On 2 August, the parachute was presented to the press and hung up with some of the children, publicly visible during opening hours. Further actions will follow and also be made public. Thanks to all who helped!

The second parachute for the https://motherearthproject.org/parachutes/ - Project! From the youth exchange of the Protestant city parish and Isreal (Mizpe Hila). Under the direction of Beate Morvai (Remscheid) and Dorit Levi (Israel). Since 2009, reciprocal exchange takes place every year. The topic of this year is: Common and opposites - how do we deal with them? The parachute deals with the topic, how can the world become a better place? The collected topics were implemented: education, love, clean ocean, global warming, energy problems, bees, against racism, reduce / reuse / recycle, trees, clean air, sheeps / cows / agriculture / food The parachute is now also taken during the visit to the city hall, then moves to different place and also to the city church, maybe it will travel to Israell as well. The parachute was painted in the Kratstation, thank you! Further actions will follow and also be made public. The parachute is currently hanging from the ceiling of the coffee roasterie and is ready for further action.